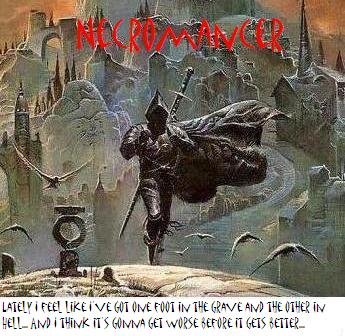 Well, you did it again. You slacked off all semester and didn't study for your finals. There's no way you're going to pass your nature magic test tomorrow. Those things are always killers. You don't even know why you enrolled in that class; you aren't even interested in being a nature mage. You don't even like the damn outdoors!

Oh wait, you know why, it's because you saw a cute witch taking the class, so like a dumb ass, you signed up for it. Naturally the moment you tried to impress her with some sort of cantrip, she laughed at you and said even if she was straight, she wouldn't go for a half assed hedge wizard like you! You really should've known better, half of those witches are lesbians anyway. That whole Mother Earth Goddess worship caters to the rug munching. (And no, there aren't any MALE witches, any self respecting man would call himself a WARLOCK, not a damn witch!)

(Sigh) Like your little sister's B'ar'b Dolly once said "Magic is hard!" Indeed. Sometimes you curse the day your mother passed her magical elven blood on to you.

Still, you're here now, so you need to make the best out of your life. You're already going to hear it from both of your parents of how you've been nothing but a disappointment to the both of them. Your Dad will probably do a little more than say that, he'll probably personally ride up to the University and beat the hell out of you for wasting his hard earned pillaging money to send you there in the first place.

Arrgh! You just wish you were good at SOME kind of magic! You have the ability; you just don't have the focus! That's always been the problem with you. Your sister has it easy, she took after Dad. Narrow minded focus on killing someone with a blunt instrument doesn't take too much effort. Of course you had to be the one that greater things were expected of.

You've tried all the schools, evocation, conjuration, illusion, divination; all of them. You can't excel in any of it. You can only get so far and then the words and gestures and well all of it just becomes too fucking confusing for you.

However, you haven't tried the "darker arts", but your Mom would definitely never approve. (Your Dad probably wouldn't care, but if you upset your Mom, it's a warhammer upside the head) In fact it's illegal to study any of them. They caused too much trouble in the past and nearly destroyed the world at one time. All who are known to even dabble in such arts are immediately taken into custody and executed.

You don't think you'd want to be summoning demons anyway; even the few "friendly ones" that work on campus are fucking assholes to the Nth degree. You can only imagine how bad the ones who haven't been living among mortals are.

However there is another dark art which you have to admit you've always had a bit of curiosity about.

The art in question is necromancy.

At this point you're willing to at least see if you're good at ANYTHING, so for shits and giggles you decide to blow off your test which you're going to fail anyway and go see if you can find out more about this outlawed dark art.

Though being a lazy sort you decide to try the library first.