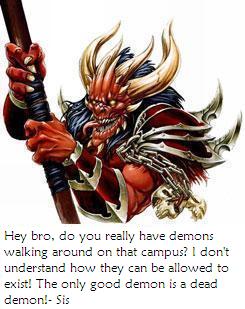 The other off limits dark arts would be summoning demons. During the middle of the Dead War, one cabal of wizards decided to risk all by making a pact with the infernal forces in exchange for their help to fight the undead. This plan was doomed from the beginning as demons have loyalty to no one save themselves. Eventually the demons managed to break their contract and most began to run amok killing everything. Oddly it was the Great Lich Lord himself that finally closed the demon portals as they interfered with his own plans of dominating the world.

There are few demons left in the world, most of them having been killed by both sides, but the ones that do exist only do so because of their own trickery and guile. Indeed, many have managed to worm their way into civilization and making themselves "useful" and pointing out that "they" were not the demons that betrayed the pact (For some reason every demon that still roams the world NEVER seems to be the one that betrayed anyone) While some may have integrated into society, nearly all still maintain their asshole disposition. Demons are still not welcomed in all parts of the world and most of the time still killed on sight, though naturally the more morally "relaxed" governments accept them and the powers they can provide.

It should be noted that Demons don't particularly like one another either, so the idea that they would attempt to open a portal to their own infernal realm is slim. The last thing they want to do is give more competition for themselvesor so they say.

They are demons after all.