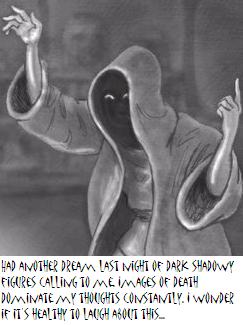 You live in a small apartment alone which is much more expensive and pisses off your Dad for having to spend the money, but your Mom managed to convince him that you need your privacy to study (She also managed to convince him that you shouldn't get a job as it would take away from your studies) However, you probably do more slacking than studying and lately you've been doing a lot more of it.

Normally you spend a lot of time in your apartment not doing too much of anything except writing about your thoughts in your journal. Sometimes you go out and try to socialize, but you find you don't have too much in common with anyone. Even in this giant melting pot of races, and cultures, you find most of them to all just be the same. Occasionally hormones kick in and you attempt to get laid, with varying success, but ever since your high school sweetheart died, you don't even feel like doing that too much anymore. She was supposed to come with you to Nuro Magic College. You and she had such plans, but of course those died with her. You often think that if she'd lived you'd be more motivated to try harder.

Life in general is beginning to feel like you're just going through the motions and "faking it". You feel like you're becoming more detached from the world, which probably explains why you've been dwelling on death a lot. Not really your own, but just in general. All this kind of thinking has got you wondering about Necromancy a lot lately.

It's getting down to crunch time and you don't know how you're going to face your parents about this semester. College hasn't been working out too well for you and given your recent unhealthy interest in Necromancy, chances are the rest of your life might not either.