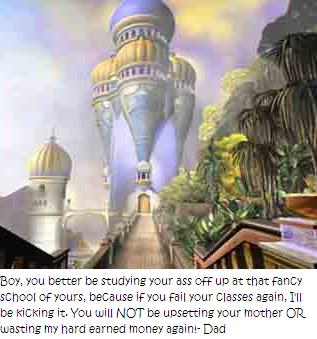 Your world is a strange mixture of magic and technology. While magic exists, it isn't used by everyone as naturally most people don't have the aptitude for it. (You being on the borderline!) and of course there are laws concerning the use of it under most governments. Technology such as gunpowder weapons and other things like steam engines exists to a limited degree. Only the rich nations such as the Zalan Empire can afford to place money in such experimental things.

Most of the world is "civilized" in that parts of it have governing bodies to rule it. Though large stretches of untamed land do exist and "civilization" can be relative in the case of some nations. Many different races exist, though how they get along is another matter.

The landscape on your world is quite varied ranging from deserts, to grasslands, to snowy mountains. But as far as anyone knows, only one large mass exists on your world. Many sailors have attempted to find other possible land masses, but all attempts have yielded nothing. The oceans do not contain any known sentient creatures, though large sea serpents have been sighted in the deep ocean by a few sailors that have barely come back alive from their circumnavigation around the world.

The underground is home to some races, though not as many dwell down there as one might assume. Nor is it a place where evil lurks, (though it can be) the underground is merely another place where some choose to live. Nobody ever chooses to live too deep underground however as the deeper one goes the more unlivable and inhospitable it is to make into a home.

The skies are clear. At one time there were a few large floating fortresses in the clouds, but during the Dead War, powerful magic cast by the Great Lich Lord caused these to crash to the ground and kill millions. After such an occurrence, it was decided that the risk was too great to have that happen again. The last of the dragons also died during the Dead War.

As for where you're located in the world, you're enrolled at Nuro Magic College.

The Nuro Magic College is located in the City State of Nuro imaginatively enough. In fact the college basically IS the city given how large a part it plays in it.

Nuro maintains its independence due to its neutrality and large magic surplus that would make even the largest of empires feel the pain if it was ever attempted to be invaded.

However, invasion is unlikely by any current nation as its Magic College is the best and is open to ALL citizens of other nations, provided they can pay the tuition costs. This also makes Nuro fairly prosperous.

Practically anything you could want is in Nuro, and if it isn't it can easily be acquired due to magic.