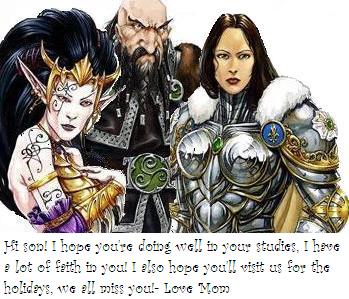 Your birth was an unusual one, which is a kind way of saying "accidental". You were born of a union of an elven mother and a ruthless human marauder whose own ancestry probably has ogrish blood.

How they met was quite beautiful though. Your Dad was storming an elven castle and after putting several pointy ears to their deaths he came across your Mom who was being held in a special tower to ensure her purity for her eventual marriage to a High Elven Prince. She was raised and conditioned to be a perfect wife and even had spells infused into her being to forge a bond with her potential mate. Of course your Dad didn't know all that, he just saw a fine piece of elven ass and naturally after all that killing, your Dad was in the mood for some lovin

Normally after such actions he most likely would've killed her or passed her over to the rest of his men where upon one of them would've killed her after they had their fun, but something unexpected occurred. Rotten ol' Dad fell in love, possibly for the first time in his life. The reasons are somewhat unclear, though you believe that it strongly has something to do with the magical aura of your mother's conditioning. (Which also explains why she stayed a bastard who had basically raped her and killed her family) Instead of killing her he felt like doing stupid stuff like being nice to her and giving her sparkly things of great monetary value. He even carried her carefully out of the burning castle.

Of course this didn't go over too well with the usual bunch of cutthroats he hung around with at the time, and he was severely taunted, mocked and even challenged. All of that soon stopped though after he killed everyone and married your Mom. The Elven Prince she was originally supposed to marry actually breathed a sigh of relief when it was discovered, since as it turned out he thought girls were "icky" and it was only to be a political marriage in the first place.

Soon your father found that he now had actual responsibilities beyond his own selfish pleasures. Not only did he now have a wife, he had a baby on the way. Your mother's influence was taking more of a hold on him as well. He agreed to give up his banditry and marauder ways, and instead became a mercenary in which he could at least somewhat legally justify any misdeeds he might be involved in. Your mother who had been sheltered for so long became enamored with city life, so they both moved into a nice house in the Zalan Empire where she became a school teacher for young children.

Soon you were born and your father hoped that you might follow in his footsteps (At this point he was eager to show his "offspring" all the cool ways to kill people) but it was obvious that you took more after your mother even if not the talent.

While your Dad might've become a "changed man" due to your Mom, he didn't change that much. You had to hear the verbal abuse and endure a lot of physical hardship (Such as him taking you out to the wilderness where he wanted you to learn how to survive for three day just wearing a loincloth!), before he finally "gave up" on making you into a warrior. Still, you probably did learn how to fight better than most wizards, but of course you're FAR from being a "real" wizard! Fortunately Dad wasn't at home for long stretches at a time since his mercenary work often kept him busy. You don't mind saying about how sometimes you wished he never came back at all! But the old bastard was just too damn tough to die. Even in that rarity when his entire companies have been killed, he'd always somehow manage to come back more or less in one piece.

The man still can inspire fear in you, even though you've moved away and are an adult now. He's the one mainly paying for your education, so it's probably good that's he's still alive despite his threats and past abuse.

Your Mom of course is nicer, and fortunately did try to shelter you from some of your Dad's wrath. However she's been pushy in her own way. The moment your Dad gave up on you, she immediately stepped in and took over. From that point she was bound and determined to groom you to be that great wizard that she KNOWS you're going to be. Sometimes you wish she wouldn't place so much faith in you, because quite frankly you don't have that much aptitude and you don't understand how she can't see that, though you're guessing that she purposely ignores that little fact. In her mind, you're going to be a great wizard no matter what, so after high school you were to be sent to the Magic College in Nuro.

Besides Mom and Dad, there's Sis who was born shortly after you were. Sis is your Dad's favorite. When it was apparent you weren't warrior material, he noticed how your younger sister would always watch you and he spar. So he threw a sword to her and told her to show him what she had. Of course being very young at the time, she could barely hold the weapon, but it was obvious genetics favored her as a warrior and had natural ability. He might've even taken her on mission with him, but your Mom wasn't having that. She did of course in time hone her skills to a great degree. So much so that she would become the youngest candidate to ever join the Zalan Empire's Elite Guard. Though your Dad wasn't exactly ecstatic with that decision as he'd much preferred her to be a mercenary like him, rather than a governmental "pawn" (as he believes) but he can respect the battle skill.

As for your relationship with her, she sometimes bullied you when she got a little more skilled with fighting techniques, though sometimes it really helped to have a warrior sister to have your back at times, like when you got jumped by some Orc youths who were attempting to rob you. She single handedly defeated them all using only her fists. Of course when you both got home SHE took your money anyway! However, she eventually was nicer to you after she developed her sense of justice.

As far as families go, you probably could've done worse.