Written by Futurecast / NR: Not Rated / 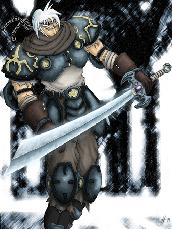 (I apologise if the ASCII graphics don't work on your computer. You can try setting your text size to medium as I know that works on some computers, and if you view everything with 800 x 600. But once severenz fixes the images so they can be added while editing a room, I will remove them and replace them with images. Thank you.)

You start off with 100 gold coins, 100 silver coins, and 100 bronze coins. 10 silver coins are worth one gold coin, 10 bronze coins are worth one silver coin. Write down your gold, silver, and bronze coins on a piece of paper and at certain bits of the story it will ask you to subtract or add some of your money. Albeit this money scheme being very simple it was officially ripped of from someone I know. Also it is important you rember all your items you have in possession. You may wish to write these down.

The only memories of home now are burdened by this new catastrophe. You are of only fourteen winters and have spent your life working as an apprentice for a mage named Zentrum. He was like a father to you. He was respected throughout the land as great friend to all. Although what became of him in the siege is still uncertain his death seems undeniable. You now sit in the old woodlands on a melancholy stump pondering who those strange men were. You feel useless and out of rage you take off your apprentice wizard hat and catapult it through the trees.
"Curses!" you scream. After much deep thinking you decide to trek on to a near town you went to a few years ago on a trip with Zentrum... Meristead...you think.. yes that was it.

After a while you manage to find the path and transcend down in it for a few hours until you hear some screams and grunts off the path somewhere.