The Country from Hell 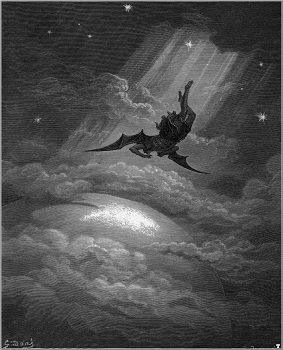 Creation Myth:
As Lucifer was freefalling from the heavens, he shat himself with fear. His shit, like yours and mine, was of a rather light density and sank only a few inches into the ground. Lucifer, as we all know, was a proud and fat angel whose fall from such heights sent him plummeting miles into the Earth. He now lives in Hell with his friends and does his best to stir up trouble on the surface since he is, as we have said, a proud, fat, and most of all, vengeful man. His earthly turds fertilized a great oak tree, under which a couple of outlaw gypsies had themselves a nice fuck. This union produced one child, and then another, and then another, until the great gypsy nation of Iad was born. But understand, stranger, that we are letting you in on our little secret. The "official" books will tell you that the original inhabitants of our noble homeland were an Aryan race known as the Mintirians. You can see paintings of the Mintirians in the Central Library of our capital city, Happytown. The artist who created these paintings was of course a filthy gypsy, who was subsequently fed to the Interior Minister's guard dogs. The Mintirians, being of a weak, complacent and lazy nature, were eventually taken over by another race, and then another, and then another, until we were all as mixed up as mongrel dogs, forced to scrape by as serfs in our own land. Iad is a beautiful place, full of trees and rivers and dramatic mountains, and of course all manner of magical creatures. Sometimes we regret that we did nothing but sit on our gypsy asses drinking Custia, our prized national brandy, as the marauders came to rape our women and profit from our very arable climate. But we accept that this was our fate, ordained by God from the moment that very first evil shit landed within our borders, from which sprang an oak tree where a couple of gypsies had themselves a nice fuck. We had exactly three great rulers in our 3,000-year history, and each and every one of our plazas, avenues, thoroughfares and donkey trails is named after one of these three extraordinary men. But most of us Iadians are not extraordinary men, so if you see us on such a donkey trail, we will probably stumble drunkenly into your path and ask you, pretty please, do you have any custia to share with your good neighbor?