You wake up in the morning with a headache. Your stomach is a little queezy. You had a heavy night of partying the night before. You try to remember how you got home and a moment of extreme regret hits you.

Last night you were at a party. At the end of the night, you and three of your friends left in a drunken haze. While you and your friends were driving home from the party, the car thudded against something. Rick, who was driving slammed on the brakes and brought the vehicle to a sudden halt. The car came to a stop and you got out to find that you had hit someone. You momentarily relive the horror in that moment when you realised that someone had been hit. You were a little puzzled to find the person you'd hit was a ninja. Or dressed as a ninja at the very least.

You all got back in the car, not wanting to stick around, all drunk and responsable for someone's death. You got dropped off and called the cops about it. They told you they would look into it. You passed out not long after...

The phone rings. You answer it and a secretary from the police department lets you know that nothing was found in the place indicated. No bodys, just tire skid marks. You thank her and hang up.

Was it just a drunken hallucination? Or were your friends messing with your head? They seemed scared enough when they found out someone was hit, but were they just pretending?

You look at the clock and realise that school (You're in high school by the way) started two hours ago. You're late.

Do you shower and go, or call off? 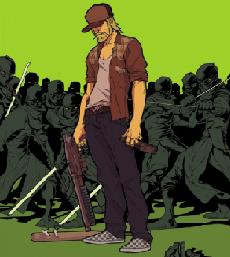