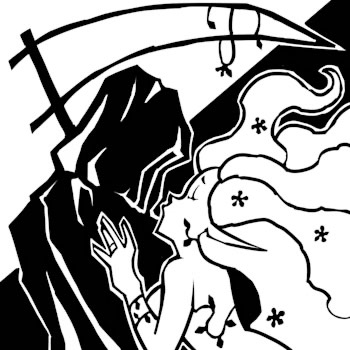 I do not understand, said Oberon.

"Where are they coming from? Where are their souls?" inquired Irene, who quickly moved beneath Oberon's arm for comfort.

Irene was upset. The flowers in her red hair wilted at the sight before them.

Humans were dying, but they were not dying at all. They were walking Earth without souls. They walked Earth in bodies whose souls had been stolen. They were vagrant and confused.

And so were these two Gods.

I have never witnessed anything like this before, admitted Oberon.

"But you must know. You know the location of every soul in and out of Earth."

Indeed. That is what makes this so mysterious.

"We will have to tell Edol about this."

Not him, snarled Oberon, as if he could. Oberon's voice was always low and monotone but Irene found it charming.

Oberon turned and left Irene's side. His dark robes followed behind him without a sound.

Irene quickly followed as well. Each wilted flower fell from her hair, landed upon the stone floor beneath them and turned to dust.

Inform Athena of this, but she shall not tell Edol. Have her visit Earth and investigate. As will I. I have souls to reap before this thief can.

She kissed him, tucked a white rose into his boney hands.

You should not warn me, my love, Oberon said. You should warn those who dare steal from me.